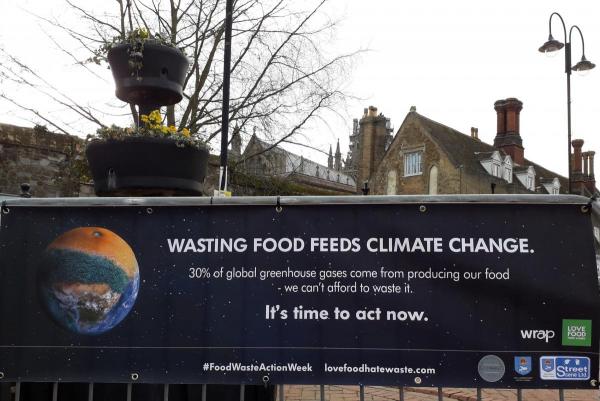 The nationwide event, organised by WRAP, one of the globe’s leading sustainability charities, aims to highlight that food waste is an issue that affects everyone – and the planet.

Ely Markets and East Cambs Street Scene are organisations that operate independently within East Cambridgeshire District Council’s two trading companies.  From 1 to 7 March they will work together to promote Food Action Week, ensuring that the campaign’s key messages reach a large audience across the district.  This will include blog posts and social media content, plus banners on the Market Place and an Ely Markets competition.

Prizes include a takeaway meal for two from the Cambridge Samosa Company, a £10 voucher from Lincolnshire Poacher Cheese, storage boxes from Jac Pots Jacket Potatoes as well as a tray of brownies from Peppy Neds. The competition aims to raise awareness of the habits that see roughly one third of food produced worldwide wasted.

The Council’s participation in Food Waste Action Week emphasises its commitment to tackling climate change, with an often-unknown side effect of food waste being that it contributes 8-10% of total man-made greenhouse gas emissions.

“As a Council, we have shown in recent years that we are wholly committed to tackling any issues that pose a threat to our natural environment and food waste is included in this.

“In East Cambridgeshire alone, a waste analysis which took place in 2018/19 found that the average family throws away a staggering 87kg of edible food every year – the equivalent of 57 chickens.

“The statistics that have been provided by Food Waste Action Week reminds us that we can all play our part to make a difference.”

“We are delighted to be supporting such a great initiative and highlighting our responsibility to do more to waste less food every day.

“Our competition will not only offer fantastic prizes, but will promote the invaluable awareness of how to make the most of the food we buy – we urge everyone in the local area to take part and help combat this growing issue.”

“During Food Waste Action Week, Ely Markets will be using social media to share tips and recipes from their traders to make the most of our fantastic market produce. To help raise awareness for this campaign, they are also running a special competition with a great selection of prizes from their traders. We hope to get as many local people involved as we can!”

Ely Markets’ Food Action Waste Action Week Competition is open from 1 to 7 March. More information on how to enter, plus terms and conditions, can be found on the Ely Markets website and on social media @elymarkets.

All food waste, such as cooked and raw fish and meat, eggshells, cheese, fruit and vegetables, tea bags and coffee grounds, can all be disposed of in your green lidded bin.

Plastic and biobags cannot be placed into green bins and instead, food waste should be wrapped in newspaper or paper bags to prevent it from sticking to the bin.

Tips on how to reduce food waste including meal planning and buying only what you need, can be found on the Love Food Hate Waste website.

Catch up on the Council's Latest News!