The Queen’s Green Canopy (QGC) is a unique tree planting initiative created to mark Her Majesty’s Platinum Jubilee. It invites people from across the United Kingdom to “Plant a Tree for the Jubilee”.

Everyone from individuals to Scout and Girl-guiding groups, villages, cities, counties, schools and corporates will be encouraged to play their part to enhance our environment by planting trees during the official planting season between October to March. Tree planting will commence again in October 2022, through to the end of the Jubilee year.

The “Plant a Tree for the Jubilee” campaign closely aligns with East Cambridgeshire District Council’s own environment agenda, which has included initiatives like the community Orchard Programme and the design a maze competition.

Our Jubilee Celebrations in East Cambridgeshire started with the planting of an official Platinum Jubilee Tree in Brinkley. 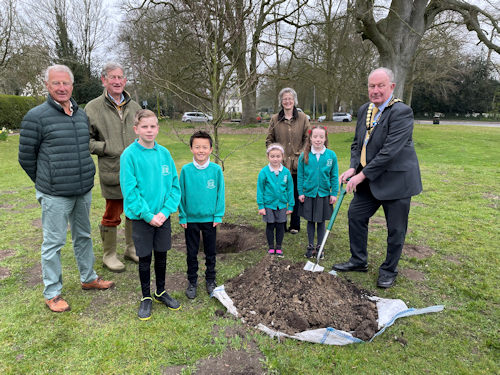 Throughout 2022 we have been working with local community groups to support the planting of more than 20 community orchards throughout East Cambs, such as the one planted in the grounds of Rackham Primary School in Witchford.
You can find out more information, as well as the location of other tree planting initiatives here: Community Orchards in the District.

The county’s largest-ever tree maze is to be officially opened at Ely Country Park on 30 May to celebrate the Queen’s Platinum Jubilee.
Designed by Toby, aged 14 the intricate walkways have been planted with more than 5000 native hornbeam trees.
A junior maze, aimed at younger children, has also been created using a layout designed by seven-year-old Jonathan and features wooden carved animals suggested by four-year-old Astrid.
It’s estimated that once they are all fully grown, each maze will lock up thousands of kilograms of carbon – helping the Council reach its aim of becoming net carbon zero by 2030.

Union Jack ribbons are being added to each of the 50 trees we have planted so far this year to celebrate the Platinum Jubilee. These have been added to the Queen’s Green Canopy Website and you can find their exact locations, along with other trees that have been planted in the district on the Queen’s Green Canopy website. The Council will be planting a further 50 trees later in the year.